Jesus Despaigne Masò and Aime Napoles Betancourt divorced when their older daughter was 10 years old and the youngest 6 1/2. Fights and many walks to school in tears where the start of Aime Despaigne’s (older daughter) mornings as a child . And that was everything she could see from the surface.

One day she came home from school. The house was on a little colourful street in Santiago de Cuba, tall, short, wooden, and cement houses surrounded theirs which was under construction back then. For those who never been to Santiago de Cuba, every house is different people try to keep their houses livable and sometimes a roof they can shelter under.

They were lucky to live in a “nicer” neighbourhood, finished houses and “nicer” people…. She rang the bell and her mom answered. Aime could smell the fish and the shrimp. Dad was home that day early. She came up to her dad’s side of the house to say hi, she hadn’t seen him in about a week. Their home, that once was a big house was now divided in two. Jesus was living in what used to be the kitchen and the master bedroom. The girls( the mother and the two daughters) used to live in what was the front patio

which had a cement roof, here Aime Napoles built a somewhat kitchen with the cement from the construction before the divorce. There was a finished bedroom in the back followed by a skinny long hallway. Inside the bedroom there was a full bathroom that didn’t have a door but a curtain separating the room from it. The only finished part of the house was the bedroom. The rest, well, cement and more cement.

Jesus used to wake up 3-4 times a week at 4 am to catch the first public transportation to Manzanillo, or another city I can’t remember the name of to go buy the shrimp. He used to pay extra to the driver of the truck that took people from town to town so when the police came to inspect, they wouldn’t find the merchandise. He used to buy the shrimp frozen and keep it on a plastic bag surrounded by whatever they could tie it to so it would stay fresh for 6 to 8 hours until Jesus got home. Most times he reached Santiago at midnight. Then he had to separate the shrimp per pound or pounds to sell them the next day. This meant he had to divide 15 or 20 pounds of shrimp on a little tiny kitchen scale which took him about 1 or 2 hours. He then woke up in the mornings and off he went to sell all the shrimp he had. He did this for 3 or 4 years.

I must say that the selling of anything, absolutely anything in Cuba is illegal. That for the amount of shrimp and fish he was selling he could’ve gone to jail for at least 5 years. He risked his freedom everyday of the week to feed the girls and himself. I also must say that Jesus went to Navy school in Cuba, he graduated as a naval Engineer.

At the beginning of his career he used to travel a lot to every corner of the world, and used to bring his family all sorts of different foods and things from every country imaginable. This was a long, long time ago before the American Trade embargo in 1996. Then when there were no countries able

to trade with Cuba Jesus and thousands of marines got stuck on the island, trying to do whatever came their way to feed their families to survive.

A public truck was stopped between towns when Jesus was bringing 20 pounds of shrimp. That day as he was paying the driver up front to keep his merch, the driver said he could drive with him in the cab.

There was a police officer checking the back and another one checking the front of the truck. Jesus was sweating through his shirt. The police officer smelled something fishy, literally. He asks Jesus to open the case which was in fact a business case from the 50’s. Jesus had told the police that he had two daugters to feed, that he needed to get to them. The police officer asked him to get of the truck grabbing the merch with them. They shove him on the prowler with another guy and off they went to the nearest police station. On the way there, the officers get a tip and as scary as it was for Jesus to be literally on the highway to hell, being a part of a police raid was super cool. The police officers get to the place of action and notice there are 2 guys dealing with unknown substances. The cop that found Jesus’ merch grabs Jesus arm, gives him the case and says “get lost”. They did not have space for 2 more men on the prowler. 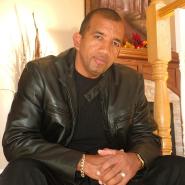 Jesus ran through the first town he saw and didn’t look back until he got home. That day, he got lucky.

His story shocked me as I had no idea of these events up until three weeks ago. Yes, Jesus is my father.

Note: The pictures used in this blog were taken at the time the events mentioned happened.

I'm sharing with you the story of Aime Despaigne, a writter and blogger who's true story will change yoours